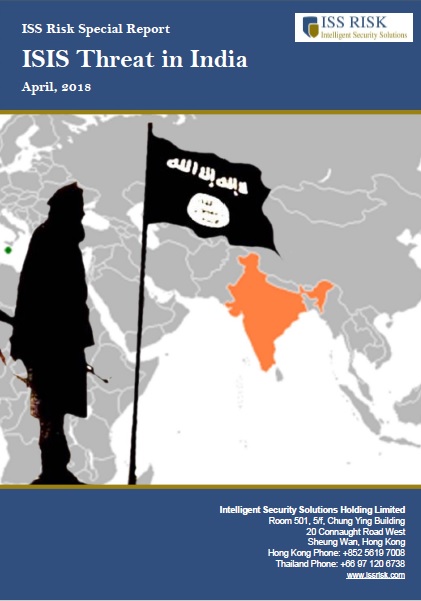 From its initial inroads into India in 2014, facilitated through existing networks of Indian terror networks, Islamic State (ISIS) has increased its efforts to recruit and train Indian Muslims to join its ranks and the organization’s battlefield efforts in Iraq, Syria and Afghanistan. With this sustained commitment, ISIS has yielded steady progress. Unlike counterparts in Europe and the US, whose willingness to join ISIS in fighting for its envisioned caliphate waxed and waned with the extremist organization’s victories and defeats, its support among Indian Muslims and sympathizers has remained relatively persistent, if limited. India’s numerous domestic conflicts and the struggles of neighbouring countries with Islamic extremism offer fertile ground for ISIS expansion going forward.

ISIS has made further progress in utilizing local conflicts and grievances in other Asian countries, particularly the Philippines, Indonesia, Bangladesh, Afghanistan and Pakistan, with India thus far mainly serving as a recruitment base for the extremist group’s transnational activities in Syria, Iraq and Afghanistan. Although ISIS’s first direct planned attack within India was foiled in 2016, the risk the organisation poses has increased in recent years despite the media’s regular espousing of its loss of physical territory as a ‘loss of strength and capability’. Our intelligence analysis however identifies no such loss of initiative or momentum. ISIS has steadily shifted its focus onto Indian targets utilising increasing numbers of trained, radicalized Indian Muslims returning from the battlefields of Iraq and Syria, with convenient local training grounds offered in neighbouring states and an expansion of their online propaganda efforts.

Online radicalization has helped alter the initial pattern of ISIS recruits hailing from the provinces of Tamil Nadu, Kerala, Maharashtra and Jammu Kashmir, with new members now hail from areas throughout the Indian subcontinent. However, ISIS’s efforts have consistently targeted and succeeded most in areas with a history of localised extremist groups and uneasy relations with the central government. Despite its relatively lower population of Muslims, compared with northern states like Jammu Kashmir and Uttar Pradesh, southern Tamil Nadu and Kerala have in the past experienced communist governance and hosted extremist groups, such as the Liberation Tigers of Tamil Eelam. With the Hindu nationalist Bharatiya Janata Party (BJP) government headed by Prime Minister Narendra Modi at the centre and the BJP also being in power in more than 20 provinces; some sections of the Indian Muslim society feel their religious and cultural identities are under threat. This has created an environment where these sections of the Muslim population feel disenchanted with the existing democratic system where they believe their voices are being neglected and become easy prays for radical brainwashing. ISIS has seized upon these grievances, releasing videos of fighters swearing vengeance for the victims of the 2002 Gujarat riots, during which Prime Minister Modi served as chief minister. Further efforts to stoke existing tensions include the organization’s efforts along with tribal communities and Maoist insurgency in mineral rich central India, which have met with mixed success in the latter case due to the groups’ contradictory goals. ISIS has also sought and is likely to continue to exploit the unstable Rohingya situation along the nearby Myanmar-Bangladesh border.

In the wake of its dislocation from Iraq and Syria and the resulting expansion of its theatre of action, ISIS is more likely to pursue creating and sustaining a global network of radicalized individuals and cells that includes India, than it is to establish any substantial ground presence. Still, the increasing number of Indians arrested in the past year either going to or returning from ISIS battlefronts indicates the organization’s growing presence in the country and the continuing success of its recruitment networks. Its twin focus on exploiting existing tensions in historically conflict-ridden areas and dedication to online radicalization in more networked and tech-savvy regions (particularly through Karnataka-born recruiter Shafi Amar), help explain ISIS’s increasing impact in India, despite its limited deployment of physical resources. After Indian authorities banned the group and shut down 32 of its affiliated websites in December 2014, ISIS continued its online efforts through Skype, Signal, Trillion, Telegram, Tulanota and other communication apps. Also, despite the small number of directly affiliated Indian ISIS fighters (only 132 have been named), ISIS has secured the allegiance of several existing domestic terrorist groups, including the Indian Mujahedeen (IM), Ansar-ut Tawhid fi Bilad al-Hind (AuT) and Junood-al-Khalifa-e-Hind (JKH), as well as smaller cells like Ansarul Khalifa Kerala and foreign groups like Jamaat-ul-Mujahideen Bangladesh (JMB), that have emerged as transnational threats to India.

Despite the relatively effective efforts of Indian counter-terrorism authorities in curtailing the threat ISIS poses, with the organization no longer consumed with defending a territorial ‘caliphate,’ it is now free to shift its strategy toward creating new theatres of action across the globe, focusing particularly on areas with large and discontented Muslim populations, as exist throughout the Indian subcontinent. As it does so, ISIS will find an India riven by internal divisions, bordered by hotbeds of Islamic extremism and populated by numerous extremist groups. Although ISIS’s numbers within India remain small, and its activities largely focused on Bangladesh and the Af-Pak region; since 2014 it has steadily developed a significant online recruiting apparatus, particularly in more technologically advanced areas like Hyderabad, as well as networks with numerous domestic terror organizations. Adding further risk are radicalized Indian returnee fighters from Syria and Iraq to highly unstable border zones with both Bangladesh and Myanmar. The combination of these factors suggest that ISIS poses a genuine and continuing threat to India going forward, one that will require the continued vigilance and effective, well-coordinated efforts of Indian authorities to keep in check.