[24 May, 2017] Philippines: SITREP on complex militant attack in Marawi City of Mindanao

1. One must question what the actual rational for the attack was. To ensure Hapilon’s exiting the city?

2. This was patently a display of indigenous combined Islamist group capabilities and coordination.

3. A further objective could be to raise tension in the region at a critical time.

5. This could essentially turn out to be a joint Islamic militant operation involving at least 2 if not 3 ISIS aligned indigenous groups. 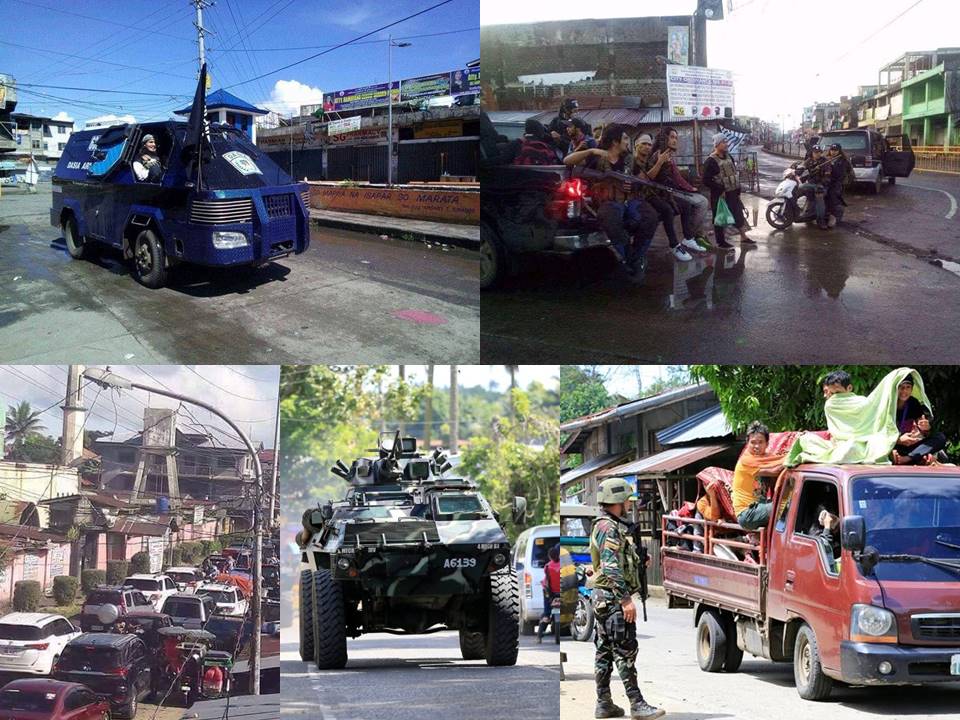 Marawi City clashes continued through the morning of 24 May to afternoon, 4 soldiers confirmed dead and 12 wounded in intense fire fights. Additionally 2 police officers also died and several wounded and 8 local residents abducted including a priest. The militants took over several buildings, a school, a medical centre and church, whilst also setting some buildings alight.  Locals reported they had also seized one of the prisons. The same reports mentioned key transport infrastructure such as main arteries and bridges were also under the control of militants. Importantly, a key objective also seems to have been achieved, 107 prisoners including those from several Islamic militant groups have been broken out of two prisons in Marawi.

Yet mainstream concerns emerge over Martial Law’s potential impact on the Bangsamoro process and Duterte’s wider security agenda. In the midst of this distraction the real rational for the incident is slowly revealing itself. This was a combined operation, involving Maute several groups it seems, the alleged presence of ASG-Basilan faction, and ISIS Emir in Philippines, Isnilon Hapilon, yet further complicates matters.

Following yesterday’s series of clashes between alleged Maute Group fighters (evidence is suggesting they did not act alone), the President’s declaration of a state of emergency and implementation of Martial Law across the entire province of Mindanao is the focus of media concerns. Although pending Parliamentary and Supreme Court review, the declaration’s province-wide enforcement as opposed to the impacted Lanao del Sur region speaks volumes as to Duterte’s intent. Whilst careful to reference the various regions of the province, Defence Secretary Lorenzana clarified that the island-wide declaration was not only in response to Islamic extremist groups ‘problems’ but also to ‘extortion’ by the New People’s Army (NPA).  A catch-all solution for a multifaceted terrorism problem.

1. One must question what the actual rational for the attack was. To ensure Hapilon’s exiting the city? To merely display the strength of the group and their allegiance to ISIS? It is a tad risky to launch an audacious complex operation of this magnitude to simply display some black flags and send an overt message of allegiance. Moreover, what exactly was he (Hapilon) really there for in the first instance that required such a dramatic exit strategy?

2. This was patently a display of indigenous combined Islamist group capabilities and coordination. This was a large scale attack launched with several objectives, freeing of key prisoners, potential testing of combined command and control of disparate groups and sending a blatant message of strength to the government and beyond.

3. A further objective could be to raise tension and thus the security levels in the region at a critical time of negotiation between the government and other rebel / guerrilla groups to endanger those talks.

6. Given the substantial dilution of the BBL in 2014 and MILF-MNLF negotiators rejection of further dilutions only two months ago, tensions without release vents may well lead to a collapse of the peace process.

7. It seems the militants from Maute and ASG have successfully exited Marawi City with the ASG-Basilan main faction leader, and ISIS Emir in Philippines, Isnilon Hapilon. Hapilon is a pivotal negotiator and lead towards unifying ISIS-pledged groups in Mindanao and he escaping again from the security services is another lost opportunity.

This could essentially turn out to be a joint Islamic militant operation involving at least 2 if not 3 ISIS aligned indigenous groups.

The rational is simple. An official statement is that the AFP moved to arrest ASG Hapilon, and his bodyguard of ASG fighters repelled them, a force of approximately 10 fighters. Then they called on Maute (one assumes a few members with them already) and that is when 50 or so other Maute members arrived in the city. Hapilon has been in Western and Central Mindanao since December 2016, with intelligence assessments that Maute have hosted him and his security compliment from Basilan as he has conducted meetings with other local groups. Meetings that have no doubt been about inter-group dialogue, and establishing a wilayat, The likelihood of a joint operation being planned by the groups would be high given, they are commonly pro-ISIS, stand against the ongoing peace process and in AKP and Maute many have BIFF and MILF backgrounds.

What does not fit is if they called for back-up in response to an AFP operation then why launch raids on the two prisons? Taking and holding key points and buildings and dividing the security forces resources is plausible. But the risk of storming two prisons and manpower required does not fit with a reactionary motive, no, that was planned. The evidence suggests a larger force deployed than is being acknowledged at present. Given the setbacks Maute has experienced in the past 9 months deploying up to a third of their number is high risk and strategically unwise, unless of course they were not all Maute members deployed.

As the dust settles on this incident the facts that emerge will speak for themselves, but it was more than a ‘dramatic exit strategy’ for a regional leader, the logistical and human resource requirements for the operation defy ‘opportunism’ regarding the prison raids, that was not a spur of the moment decision to liberate their comrades.