1. The AFP strategy is now beginning to look like one of containment as opposed to ousting the militants.

2. This is patently a major failing on the part of the AFP to not have closed down all supply routes and escape channels.

3. There is absolutely no question that the Philippines government, military and intelligence services along with most media sources and so called expert analysts have grossly underestimated the scale of what unfolded.

4. A further important consideration one can deduct from this siege is the evidence of a cohesive command and control dynamic being displayed over what were disparate groups, or considered or perceived to be so, beyond Marawi. 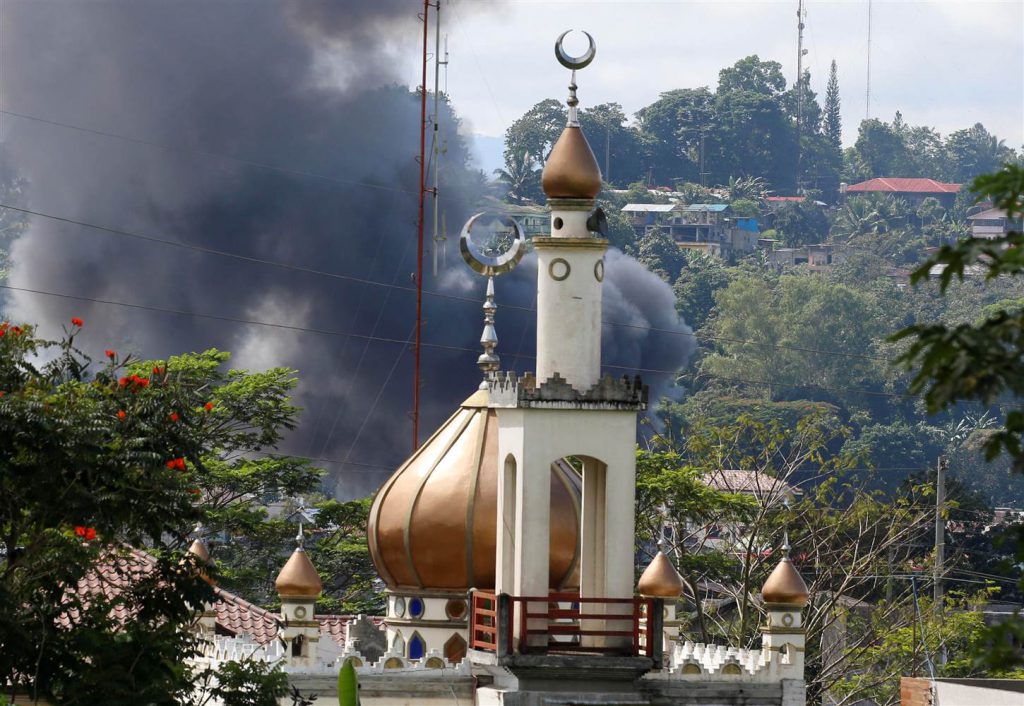 The siege of Marawi continues and is now at almost seven weeks despite the Armed Forces of the Philippines (AFP) attempts to dislodge the militants.

Government forces are still trying to dislodge militants from numerous Barangays in Marawi with the death toll creeping ever upwards. There is now a reluctant admission that the preparation and planning for this siege had been long in the making, a video recovered from Marawi shows militant commanders discussing their strategy to seize key locations and choke points prior to the botched raid to arrest Isnilon Hapilon. Irrefutable evidence of cohesive command and control. Contrary to the spin the AFP and government are putting on matters, declaring that their raid to arrest Hapilon actually possibly or partly disrupted the militants’ plans and that they may have prevented them taking more ground and causing even more damage. One supposes the definition of ‘even more damage’ obviously carries different connotations for the AFP and the government, as the damage shown in this satellite image below (News Channel 13, http://www.krdo.com/news/national-international-news/images-of-devastation-in-isisheld-marawi-in-philippines/576486592) is rather extensive as it is to say the least. Given during the past six+ weeks the AFP have practically levelled the area of the city held by the militants, it is surprising they continue to take the position in regards to that the botched Hapilon raid may have been instrumental in inhibiting greater damage. 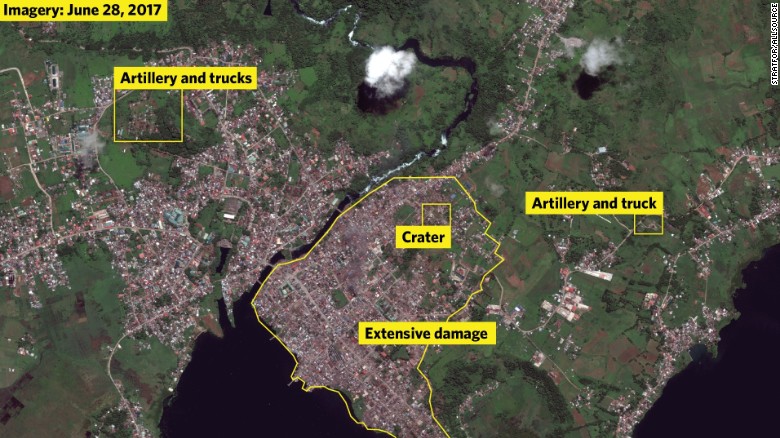 1. The AFP strategy is now beginning to look like one of containment as opposed to ousting the militants. The militants had uninterrupted supply routes into the city via Lake Lanao for the first five weeks of the siege, the supply line was only disrupted this past week by the AFP. That complicates matters in respect of the possible resources both material and human the militants have at their disposal. It also goes some way to explaining ‘why’, if so many were allegedly being killed (336 at last AFP official tally) and wounded and expending so much ammunition, they are still an effective fighting force. Doubtless they have been ferrying wounded out and fresh fighters in via this supply line along with resupplies.

2. This is patently a major failing on the part of the AFP to not have closed down all supply routes and escape channels. It also begs the questions, exactly how many militants are involved, from which groups, from which other countries, and how prepared had they been for Marawi and the bigger question begs asking, what else they are planning or have planned? One can understand a degree of accuracy in estimates of military casualties and fatalities, but as for the militant head count, that is a much less exact exercise. Furthermore, if the AFP figures are to be taken on face value then this is an admission that the actual extent of the militant force is significantly larger. If 336 are alleged confirmed dead, regardless of how that figure has been ascertained, then significant numbers must also have been wounded, not to mention the fact that there are obviously still many remaining, capable of fighting and holding their ground, extrapolated together and the true numbers of militants greatly surpasses all earlier estimates and reported strengths.

3. There is absolutely no question that the Philippines government, military and intelligence services along with most media sources and so called expert analysts have grossly underestimated the scale of what unfolded. Therefore, it is possible that they may not be fully cognizant of what is yet to unfold across Mindanao and potentially beyond. For fear of stating the obvious, the pre-planning involved in Marawi was, well, extensive as we now well know. With that little detail at the front of one’s mind then what other preparations and plans exist to expand this ISIS sponsored push on other fronts across Mindanao and the country? From a rudimentary strategic perspective, they are likely to have more plans in place for similar assaults, as we witnessed on the 21st of June Pigcawayan town in North Cotabato. One can deduce that if all this effort has been expended on Marawi it would be logical that such planning has been developed to sustain their campaign beyond their efforts in Marawi.

4. A further important consideration one can deduct from this siege is the evidence of a cohesive command and control dynamic being displayed over what were disparate groups, or considered or perceived to be so, beyond Marawi. It is not just about the physical presence of fighters from different groups in Marawi, far from it. If that command and control as we believe has become centralized for a plethora of disparate groups, then they are obviously no longer disparate. They are organized, structured, with purpose and leadership and critically with strategic objectives. The strategic objectives are clearly not yet known to the AFP. What this translates to is the key consideration to be examined next, where, what, when and how do they expand their campaign? Aside from the unknown number of foreign fighters and external support feeding this campaign from Malaysia and elsewhere, the combined fighting capabilities of a dozen indigenous Islamic orientated groups alone is formidable. In light of what has taken place in Marawi, how prepared are the AFP for several more simultaneous siege scenarios? Evidently, they will be stretched, couple this with increasing NPA activity exploiting the current circumstances and further distracting the AFP, potentially numerous fronts may open up across the board.