1. Despite all serious blows to the group’s network, Neo-JMB continues to pursue its objectives and is continuing to strengthen its organisation and increase the number of members and geographical spread of the network

2. What has become apparent in the past 6 months particularly is that the group has at least two important geographical hubs

3. The involvement of former Islami Chhatra Shibir cadres in leadership positions of Neo-JMB should be another cause for concern for the Bangladesh government

4. Neo-JMB is eager to expand its footprint regionally and wants to ally with likeminded organisations in the Indian sub-continent

5. While it is puritan when it comes to rejecting other prominent jihadist groups as being less Islamic or not well-informed; Neo-JMB is rather open when it comes to developing alliances with other likeminded organisations in Bangladesh

6. Without over generalising, one can assume that Neo-JMB is a respected organisation in the eyes of Bangladeshi radicals, a bastion of jihadism as such 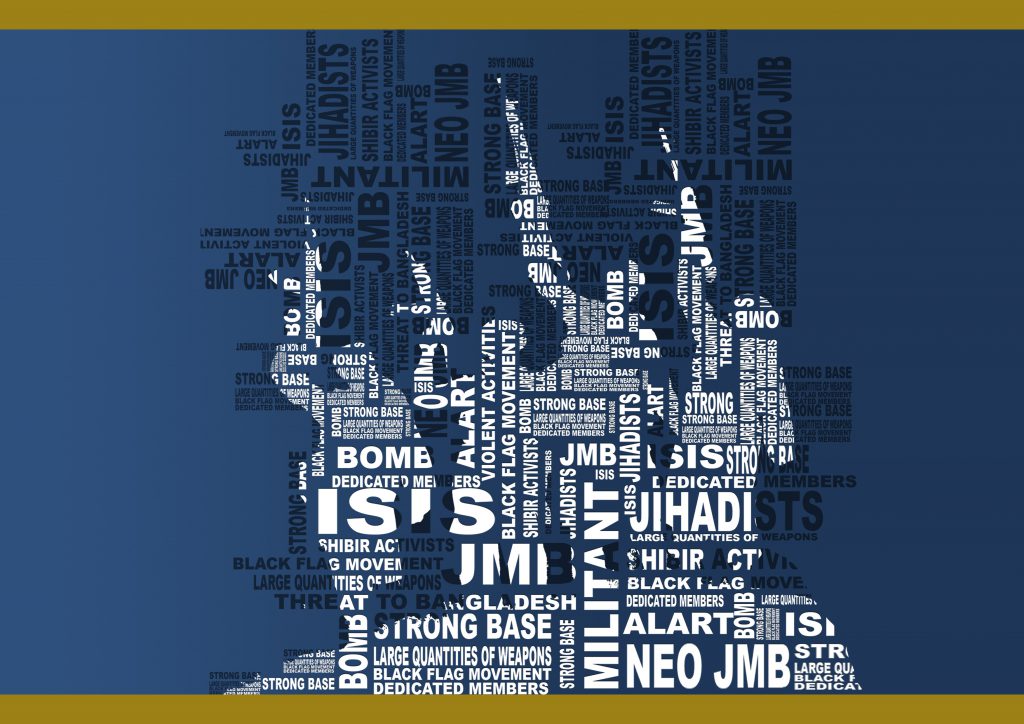 In the last few days in Bangladesh some specific intelligence have been made public regarding the Jamaatul Mujahideen Bangladesh (JMB) jihadist group. This new information points in contradictory directions and can be summarised as follows:

The Chief of the Counter Terrorism and Transnational Crime (CTTC) unit of Dhaka police has claimed that the police and special forces have destroyed the operational capacity of militants in the country and they do not expect any further large scale or major terrorist attacks as a consequence. He further stated that since July last year 68 militants had been killed and hundreds captured in multiple counter terrorism operations.

The timing of this announcement on the back of other released intelligence suggests this claim to be overly optimistic. Since June 2017, has there been a decrease in operations against militants? Yes. However, what is disputable about this is it may well be more to do with intelligence drying up rather than militant networks having been dismantled.

Let’s examine several other key developments that have not been given the same level of media exposure as the CTTC Chief’s announcement.

1. Rashidul Islam alias Rash alias Abu Jarra, a Neo-JMB leader and a key plotter of the July 2016 Gulshan attack, was recently arrested on 28 July. Rashidul transported the arms and the grenades used in the attack from Chapai Nawabganj district (Rajshahi division) to Dhaka. Rashidul was the sixth member of the group, who was supposed to carry out the attack, but for unknown reasons he was left out. He was a close confidante of the then Neo-JMB chief Tamim Choudhury, and was arrested on information gleaned from Soheil Mahfuz, another mastermind of the same attack, who was also arrested on 8 July. The security forces managed to gather the following vital information from the interrogation of Rashidul:

a) Former cadres of Islami Chhatra Shibir, the student wing of Jamaat-e-Islami, are now providing leadership to   Neo-JMB. Rashidul himself joined the outfit after being inspired by Shariful Islam, a Shibir leader involved in the hacking of a professor of Rajshahi University named Rezaul Karim in April 2016. ISIS later claimed responsibility for the attack.

b) He indicated that a factional feud is underway inside Neo-JMB and allegedly the group has split under two rival leaders – Ayub Bachhu and Hasidur Rahman Sagar. The feud has turned violent and so far seven militants have been killed in infighting. Rashidul belonged to the Sagar-faction.

2. A Neo-JMB operative based in Kolkata (West Bengal, India) is currently under the lens of Indian intelligence agencies. The suspect is reportedly working as a logistics head of the group in West Bengal as well as serving as a principal conduit between Neo-JMB and militants operating in the Indian state of Jammu and Kashmir.

3. Neo-JMB is trying to build a strong base for the group in Narayanganj district (Dhaka division). This information was revealed through the interrogation of three militants belonging to the group who were arrested while conducting a planning meeting at Narayanganj Sadar sub-district on 28 July. Reportedly, 40-45 militants of the group had gathered for the meeting, but somehow the rest of them managed to escape.

4. Neo-JMB is also continuing to recruit new members. Around 100 members of Neo-JMB gathered in a madrassa at Sonatala area in Bogra district (Rajshahi division) four months ago and formed a Sura committee (leadership council) of 10 members. This Sura committee coordinates recruitment and training of new members as well as issues orders for carrying out different militant activities.

5. A little-known militant outfit named Return to Islam (RTI), which was formed in Sylhet in 2012, has increased their activities in Dhaka. The group is headed by an individual named Mamunur Rashid and it is in the process of integrating with Neo-JMB according to intelligence garnered over the past few months, particularly since the siege in Sylhet.

1. Despite the alleged factional feud and continuous counter terrorism operations, hundreds of arrests of members, all serious blows to the group’s network, Neo-JMB continues to pursue its objectives and is continuing to strengthen its organisation and increase the number of members and geographical spread of the network. The organisation has shown remarkable tenacity in terms of surviving and maintaining a desire to grow, despite critical blows delivered against them by the security forces. The likelihood of the organisation being destroyed through military means alone has essentially not been proven. In the long-term, in addition to a sustained counter terrorism campaign, a non-military strategy of countering violent extremism (CVE) from the government will be required. JMB will continue to pose a threat to Bangladesh for years to come and simply announcing their demise in the media is insufficient to neutralise the threat.

2. What has become apparent in the past 6 months particularly is that the group has at least two important geographical hubs. The first hub is near the Indo-Bangladesh border in Rajshahi division, most likely in Chapai Nawabganj or Rajshahi or Bogra district. We believe this to be the logistics and training hub of Neo-JMB. The other one is in, or near, Dhaka, most likely in Narayanganj district in the outskirts of Dhaka. This we believe to be the operational hub of the group, where tactical units converge before carrying out or attempting to conduct their operations, it is clearly also important for planning purposes. In early June of this year, large quantities of weapons, including two rocket launchers were recovered from Rupganj sub-district of Narayanganj. At that time the only information revealed was that the group involved behind stockpiling those weapons intended to create large-scale subversive activities across the nation. Coupled with the latest information, it seems highly likely that Neo-JMB was involved in procuring these weapons, which is consistent with its plan of creating a strong base in the district and launching further attacks in Dhaka.

3. The involvement of former Shibir cadres in leadership positions of Neo-JMB should be another cause for concern for the Bangladesh government. Historically, all the militant outfits of Bangladesh attracted large numbers of members from Shibir. With thousands of dedicated members, Shibir is a very well organised and highly motivated group, whose core ideologies are aligned with those of Neo-JMB. With many Shibir activists now being arrested and prosecuted by the government for just being members of the group, even without participating in any violent activities and being denied legal counsel; convergence between Neo-JMB and Shibir is likely to become more prominent in the near term and swell the ranks of Neo-JMB at an accelerated rate. This is not the sort of CVE program that is likely to have a positive impact; on the contrary, it will facilitate further recruitment and entrenchment of radical ideology.

4. Neo-JMB is eager to expand its footprint regionally and wants to ally with likeminded organisations in the Indian sub-continent. Our assessment indicates they already have connections with ISIS HQ in Syria as well as in eastern India. Now, they are trying to establish connections with jihadists in Kashmir. This is indicative of the regionalisation of their strategy as well as localised tactical considerations. However their use of the Indian landmass to advance their objectives has still not been fully recognised or acknowledged. In the meantime the group is making inroads into India and reversing them into Bangladesh to attain their broader strategic aspirations.

5. While it is puritan when it comes to rejecting other prominent jihadist groups as being less Islamic or not well-informed; Neo-JMB is rather open when it comes to developing alliances with other likeminded organisations in Bangladesh. The collaboration with RTI is a point in case. This also points to another important inference. If small jihadist organisations are willing to align with Neo-JMB, one can assume that Neo-JMB retains legitimacy in the eyes of other jihadist groups in the nation. Such organisations can attract new partners only when they are perceived as to be winning or at least to be on the right path towards attaining the ultimate objective.

6. Without over generalising, one can assume that Neo-JMB is a respected organisation in the eyes of Bangladeshi radicals, a bastion of jihadism as such. And this has not changed despite the numerous arrests and killings of its top leadership. Until this image of Neo-JMB can be changed, it is almost impossible to neutralise it completely. Moreover, it’s overarching ideological appeal and evolving structure place JMB in a strong position to lead Islamist radicals collectively in the future, something akin to Abu Sayyaf Group (ASG) or Maute Group in the Philippines, whereby they are the standard carrier of the Black Flag movement that has emerged there. JMB is similarly finding they are flying the flag for jihadists in Bangladesh.