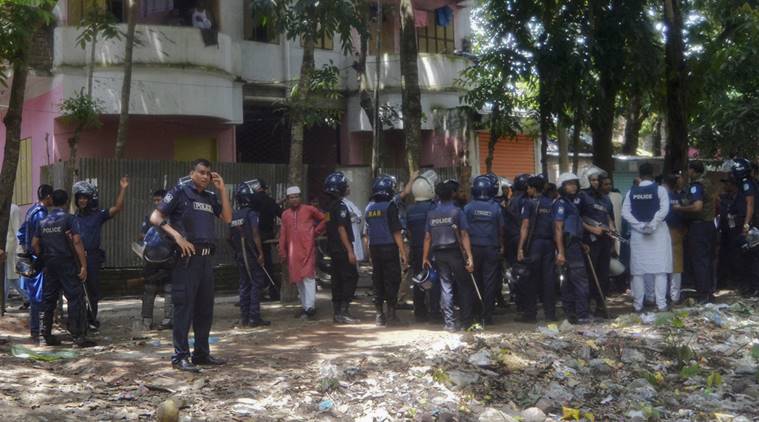 Recent developments in Bangladesh have come to light through interrogations of terrorist suspects that require specific attention.

The garment industry is the second largest employer in Bangladesh after agriculture. Just last month the government announced their intentions to open the industry to FDI.  In the fiscal year 2015 to 2016 apparel export accounted for some 90% of Bangladesh’s export earnings. Over 300 foreign firms operate in the export processing zones (EPZs), this government initiative, which is meeting stiff local resistance would open the industry to competition, that is not pleasing local manufacturers who are stridently opposing the move. But there are others seeking to exploit the situation and their motivation is not for profit or keeping wages low.

The industry is one of the most problematic in the country, from low wages to rampant health and safety issues, and high workers dissatisfaction with employers, as demonstrated by the raft of labour unrest occurring on a regular basis across the industry.

This is not lost on JMB, who by tapping into this pool of disgruntled and exploited workers have access to a stream of uneducated, poorly paid and disenchanted individuals, already angry at the system. Add to this the prospects for employment turmoil as wages rise and business’s go under, and the prospects for significant unemployment rise also. These aggrieved workers may easily find solace in the alternative religious and political views espoused by groups like JMB.

Resiliency of militants continues to be demonstrated

It is 12 months since the terrorist attack on the Holy Artisan Café in Dhaka, since then the security and intelligence services in Bangladesh have been successful in disrupting the terrorist network, particularly that of JMB. There have been dozens of incidents, raids, shoot outs, suicide bombings and attacks, thus far luck and a large degree effort have thwarted these attempts. The militants have at the same time demonstrated resiliency and also capacity, with significant quantities of explosives and more advanced weaponry continuing to be seized, pointing to a well-funded and structured supply chain.

The failure of the militants to achieve a visible success has led to frustrations no doubt, however, that is also giving way to opting for softer or easier target selection, and they are desperate for a success. Soft targets present the quickest route to success to reinvigorate and bolster their cause and support base. One or two successful high profile murders of foreigners, or a factory siege or suicide bombing of a factory in an EPZ would have a significantly negative effect on the industry in the country. However, such an incident will yet again focus international attention on the militant landscape in Bangladesh at a time when ISIS are clearly making their presence felt across South and South East Asia.

As we pass in the second half of 2017, the Bangladesh government are still maintaining their ‘No ISIS here’ position. Yes, there is certainly truth in their claim that JMB are very much active, but regardless if JMB are the primary group responsible for many of Bangladesh’s terrorism woes, they are aligning themselves with ISIS. Just as the fallacy of the Maute Group or ASG being deemed as nothing more than ‘thugs and bandits’ by the Philippines government, the threat from JMB is also being grossly misrepresented. When the JMB manage to pull off a siege in a factory and separate the foreign or non-Muslim staff perhaps then the truth may be finally acknowledged. As this industry and sector is opened to FDI this year the attractiveness of it as a target for the militants may well open new fronts and sources of targets for them.