1. Maute’s launching a relatively large scale terrorist incursion and raising an ISIS black flag in Marawi City of Lanao del Sur is an escalation of intent and patently designed to send a message.

2. Classic guerrilla tactics seem to be at play dividing and confusing the security forces reaction.

3. President Deturte has declared martial law and a state of emergency in the city and province until the situation can be brought under control. 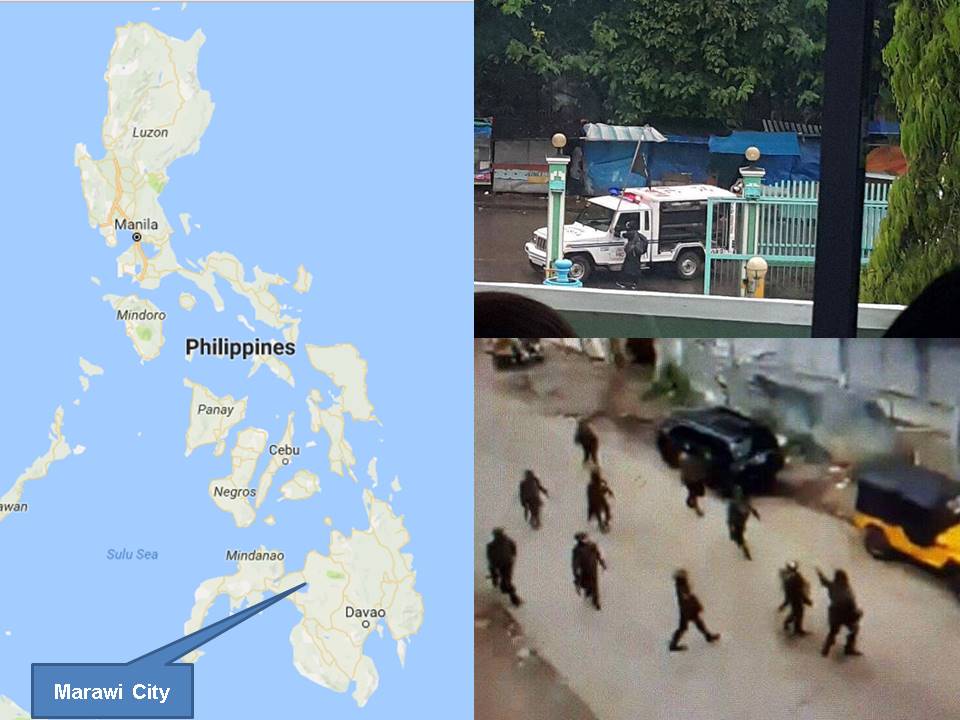 Clashes erupted between Maute Group terrorists (an ISIS affiliated group also known as Islamic State of Lanao) and Filipino security forces in Marawi City (Lanao del Sur province, Mindanao) in the afternoon of Tuesday, 23 May after the former took control of certain parts of the city. The terrorists are believed to have taken control of the Amai Pakpak Medical Center in the city and raised an ISIS black flag at the facility. The Marawi City jail is also under siege. Additionally, cars moving with the ISIS black flag could be seen in different parts of the city. One police officer has so far been killed while five Filipino soldiers have been injured. Unconfirmed reports indicate that Abu Sayyaf Group (ASG) leader Isnilon Hapilon was present in Marawi City at the time the clashes broke out and that he was holding community meetings with local residents of the city.

President Duterte has declared martial law in the entire Mindanao area amid the ongoing attack in Marawi. President Duterte will also cut short his trip to Russia due to the Marawi situation.

1. Maute’s launching a relatively large scale terrorist incursion and raising an ISIS black flag in Marawi City of Lanao del Sur is an escalation of intent and patently designed to send a message. The groups audacity and ability to penetrate the city and seize locations and repel police and military counter attacks indicates a significant level of preplanning and preparation by the group. It also underscores that the local security forces neither anticipated nor were prepared for this level of assault

2. Classic guerrilla tactics seem to be at play dividing and confusing the security forces reaction. With ongoing fire fights in different areas of the city the exact number of terrorists involved remains vague at the moment, some estimates suggest 15 to 20 terrorists involved. However, information from local residents would indicate this number to be higher. The group has conducted large assaults in the past as distractions; it is no surprise that reports that the city jail is under siege. In 2016 Maute launched an assault on a prison in Mindanao to release members of their group.

3. President Deturte has declared martial law and a state of emergency in the city and province until the situation can be brought under control. The security forces and the government will be under pressure to bring the situation under control and restore order quickly, although, that clearly is not happening, the incident is now more than 12 hours long and continues. One police officer is confirmed dead and at least 5 soldiers wounded so far. Even with Maute’s history, this is a significant escalation in their modus operandi. However, with the prospect of ASG leader Isnilon Hapilon being present in the city could be precursor to consolidation of capabilities, more to follow on this.

2. Personnel currently in Lanao del Sur province are likely to face severe travel disruption in the coming days. Reports of highways being blocked indicate that a potential scarcity of essential items is likely to happen in the next couple of days. Personnel should try to maintain stock of essential items and remain inside secured facilities until the situation normalises.

4. Business operations in the affected areas should be kept shut for the time being and only after proper verification of the surrounding environment any decision should be taken about reopening such facilities.

5. Monitor the local media, social media and information from reliable local sources for updates on the ongoing situation.