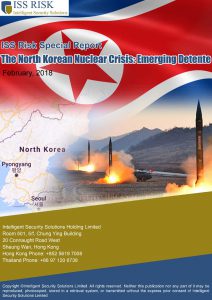 The cycle of tension, aggression and animosity on the Korean Peninsula between the Democratic People’s Republic of Korea (DPRK, North Korea) and the U.S. reached new highs as 2017 drew to a close. As we entered 2018, the personal acrimony between the leaders of the two protagonists had been pared back somewhat, with an initiative of engagement from ironically the younger of the two leaders.  The intensity of the rhetoric was further alleviated early January when the North Korean leadership suggested their nation’s attendance at the Winter Olympics in February in South Korea. The U.S. however, was quick to pour cold water on the move and attempted to take the optimism out of the initiative and frankly move to scupper it. Nonetheless, the Republic of Korea’s (RoK, South Korea) President Moon responded favourably to the DPRK’s overtures. The U.S. reaction to Moon was to remain resoundingly negative and dismissive, with all too common mixed and confused signals continuing to emanate from the Trump administration.