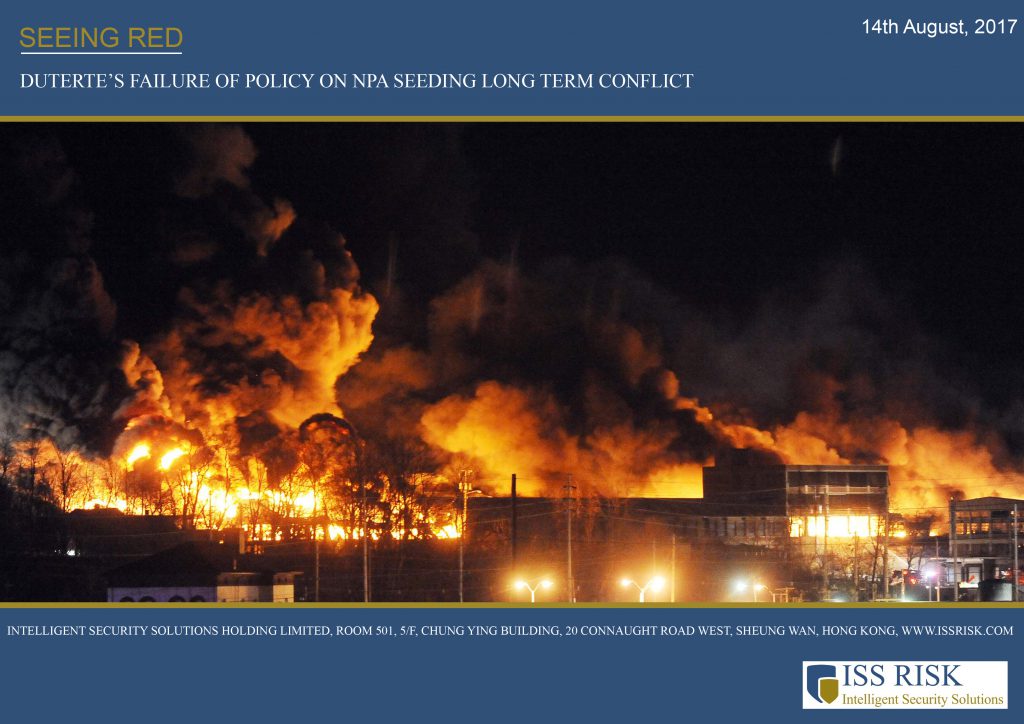 2. Duterte’s plan to include CPP in the Senate and have peace achieved through their inclusion failed … the public, the Armed Forces of the Philippines'(AFP) and the Senate’s patience is at its lowest, with Senators this month asking for all CPP members to be ejected

3. Duterte’s hardman image, i.e. ‘protector of the people’, is already tested by the Marawi Crisis … this second collapse in the CPP-NPA-NDF peace process and the violence it has brought will not serve his presidential image well

4. Late 2017 into 2018 we will see an escalation of violence in parallel with the martial law in Mindanao being upheld to year-end … Duterte must decide before 2018 if martial law is best serving the containment of the NPA threat too, or whether a remodelling of the 2016-CPP-Senate posts approach with NPA senior commanders included in the political circle is better

The Malacañan Palace is facing a serious and complex challenge that is at once as much political as it is one of domestic security concerns – and ultimately one that is a worrying drag on the economy’s (finally) rising FDI profile. The clear spiking in insurgent activities of the NPA since July is threatening to not only shred a core electoral campaign pledge of leftist everyman President Duterte, but is also symptomatic of a rapidly darkening ‘second front’ faced by the security forces.

Duterte has within one year created, picked back up off the floor and now apparently smashed a platform that was specifically built to facilitate meaningful and progressive peace talks towards ending a 27-year stalemate between the government and the CPP insurgency.

This return to the precipice of a total collapse of dialogue is showing signs of no olive branch sprouting any time soon, moreover a descent into attacks that at quick glance would appear sectarian in nature, and would serve only to further toxify political exchanges.

Why the spike in attacks since July? What of the solid progress in the 4th round of peace talks earlier that month?

The inclusion of the CPP armed wing, the NPA, in President Rodrigo Duterte’s justification for the five-month extension of martial law over the southern region of Mindanao in July was seemingly little noticed by the international press. Between their focusing on the war on drugs campaign for much of 2016, Duterte’s vocal desire to move away from long-standing close U.S. relations and the ‘surprising’ South China Seas borne new ‘Manila – Beijing dynamic’, all remaining attention has focused on indigenous Islamic militant ‘bandit activities’ and an (overdue) awakening to the very serious ‘regionalisation of jihadism problem’ being played out in Marawi City.

The country’s military and police commanders, however, have been at the very least equally concerned over the domestic insurgency threat posed by the Marxist CPP-NPA rebels, as to the realisation of the depth of the foothold global terrorism has in their country. The inclusion of the NPA in the government by Duterte upon entering office in mid-2016 did little to undo this. However, despite the collapse and resuscitation of dialogue in February and then the ongoing skirmishes across the country since then, by mid-July the 4th round of discussions saw clear progress. July 15-17 talks saw approximately 60-70% of the comprehensive agreement on social and economic reform (CASER) framework – provisions on agrarian reform and rural development (ARRD) – drafted. Quite the achievement given the ongoing killing of government security forces, as well as acts of property destruction and extortion of companies by the NPA and killing and capture of many of its members.

The tipping point came in the final furlongs before the 5th round of peace talks in Europe. An attack by the NPA on the Presidential Security Group team (PSG) in North Cotabato in Mindanao on July 19, pulled the hairline trigger to cancel the peace talks. Although serious progress in the CASER had been made, the attack exposed the local NPA commanders’ view that the forthcoming extension of martial law on July 22nd meant one thing – a crackdown and persecution of the NPA. This belief ‘expressed’ by the ambushing of a Duterte’s PSG and the tension that had been building since the start of martial law when the NPA leadership called for their members to step-up attacks was too much for Duterte to let go. With the first State of the Nation Address on July 24, Duterte knew his bluff had been called by the NPA, and so in keeping with his hard man image, his sole, and courtesy of the July 19 ambush fully ‘legitimised’ card to play was to lambast the CPP, and declare all-out-war to smash the NPA. ‘Talking whilst fighting’, as had been proposed (by the CPP-NDF) and somewhat accepted by the government since February was not going to wash this time. The events in Marawi City had the public already too concerned for him to employ a more diplomatic route, one which would also generate criticism from his own party.

CPP-NDF vs. NPA – what can be truly taken from this second breakdown in talks?

The stark reality is that the CPP-NDF leadership of Jose Sison, the long-exiled founder of the CPP, and his peers are from the previous generation. Their power is one of figureheads and historic party seniority. It is the younger generation of field commanders that possess the military power, and pose the genuine on-the-ground threat to business’, government offices, the rule of law and security force personnel. As Intelligent Security Solutions has long assessed, the talks in Europe are secondary to establishing dialogue with senior field commanders of the main ‘NPA Fronts’ (provincial and district level units). The Duterte administration is littered with agreements in Europe with the CPP-NDF that have simply failed to gain traction with the NPA. Their operations and activities have clearly continued on regardless of any senior or founding members of the CPP-NDF-NPA complex’s declarations. Unlike the CPP’s words of mid-2016, they clearly did not recognise Duterte as a ‘man they could deal with’.

Looking forward into 2018, the admission by the CPP-NDF earlier in the year that it cannot be held responsible for the NPA’s activities whilst talks continue appears the ongoing gospel truth. Duterte and the government are in a quandary, as the continued inclusion of the CPP in the Senate, and extension of olive branches (Duterte describing himself as a Leftist, the passing of unilateral ceasefires, suspending arrest warrants etc.) look unlikely going forward.

The toxicity of the exchanges between the two sides in the political arena, is in the shadow of near daily attacks in known NPA strongholds such as northeast Luzon, Negros in Visayas and various hinterlands in Mindanao. Platoon size attacks by NPA forces against Philippines National Police (PNP) bases, and attacks on large plantations or construction firms are catalogued each week in July and August and show no signs of slowing. NPA units are being identified as conducting recruitment and building infrastructure in regions previously of limited importance to them, such as Palawan, or of areas such as Bohol which have been ‘quiet’ for several years. None of these actions are conducive to trust returning to the peace process soon. So, what now?

Duterte’s dilemma ahead of the end of the current extension of martial law in Mindanao is whether to decide if the catch-all bluntness of the martial law tool used to contain and hopefully suppress the further growth of Islamist extremism and stave off global jihadism repeating Marawi again, will work against a deeply entrenched communist insurgency. In the interim, public safety, extortion and attacks against businesses, and the creditworthiness of foreign investments in agri-commodity, extractive industries or infrastructure opportunities will deteriorate in many parts of the country.