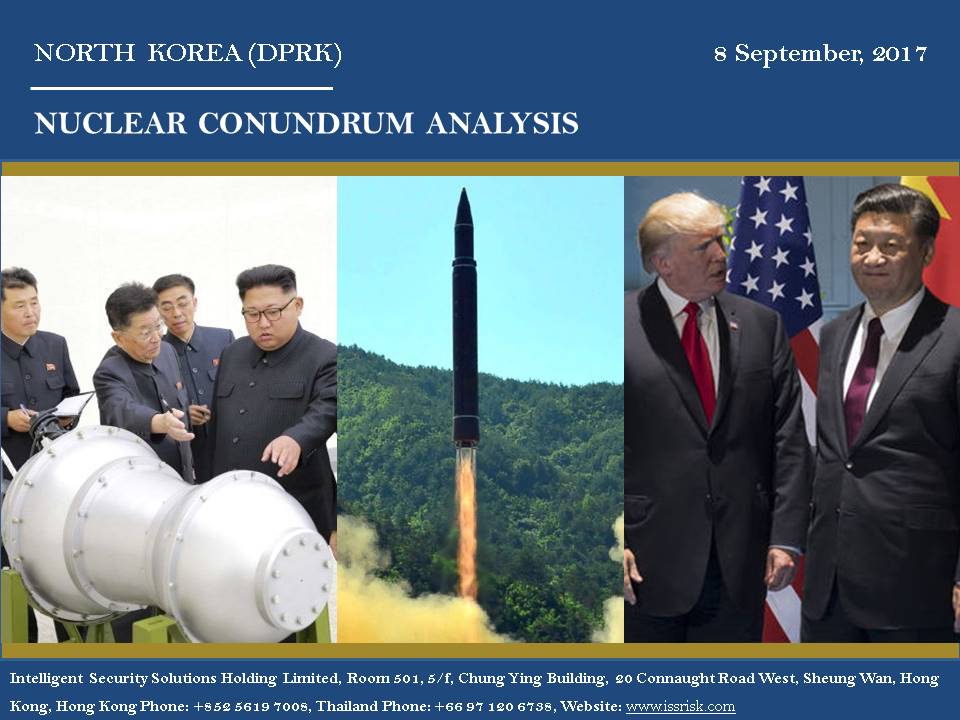 Yet again tensions on the Korean peninsula are higher than ever, or at the very least, higher than any other time within the past 25 years. North Korea conducted their sixth, and by far the most powerful nuclear test on the 3rd of September. They labelled it as a successful test of a miniaturised hydrogen bomb, able to be fitted to an ICBM. This watershed test follows on from August, when they also conducted further ICBM missile tests enhancing solid fuel, nose cone re-entry, enhanced engine capabilities, and claiming to have successfully merged it all together and achieve their objective to enhance long range capabilities. Further sanctions were added to the already complex layers of existing sanctions, new and even more draconian sanctions are now being discussed. They are all rather academic. The North Koreans in the past five years, and past 15 months particularly, have accelerated their developments to reach a tipping point whereby they have all but achieved their desires, in spite of the plethora of sanctions.

There is one fundamental element now still missing from the process, the actual successful launch and detonation of a nuclear tipped ICBM as a confirmatory test of the complete merger of all the associated technologies. This presents perhaps their greatest hurdle and may be the straw that is just too much for the Americans and the West to allow to happen. Unlike the great powers who have developed nuclear weapons, North Korea, does not possess domains or territories where they can conduct such a test freely. The reality may be that they claim to have demonstrated such capabilities in merging the technology required, but they have yet to fully field or operationally test the final product. Will this deter them though?

In 2016 whilst in country North Korean government contacts were delighted to advise the author that they were testing nose cones in a military factory outside Pyongyang and that they were happy with the progress. Outside analysts dismissed this piece of information when proffered several weeks later as typical North Korean hype and nonsense. As the North Korean government officials had put it “we have to start somewhere”, but the mind-set that has governed thinking in the West that the North Koreans are delusional and detached from reality, often making false and rhetorical threats, or simply talking a lot, has led us to critically underestimate them. From the North Korean perspective their ‘Juche’ philosophy is actually so engrained and integral to their survival, they really do believe ‘they have to start somewhere’.

What is and has been missing is an understanding and desire for dialogue. What is it that drives the leadership of the country to attain this nuclear capability? What drives an entire nation to follow unquestionably to deliver? Why does the West not understand their determination and resolve? Geopolitically speaking, there are now many more dynamics in play in North East Asia than a decade ago or even two decades back. The Cold War ended, seeing America assume global hegemony, Russia’s decline then resurgenced with a modernised military capability inside two decades, and China’s ascent (with much more to come) in every respect and wish to challenge the U.S. hegemony not just in Asia, but globally. In the midst of these developments the irritant that is North Korea has simply never gone away. On the contrary, it has managed to become more relevant as opposed to being irrelevant.

The North Korean’s have always held their sovereign security as paramount, hence their retaining the largest standing army in the world for decades, though unsustainable economically. Nuclear weapons are a deterrent, but also allow for streamlining of conventional forces, a reallocation of resources and funds back into the economy. Kim’s agenda here is to rebalance the economy, which he has been doing, with gradual deferment of the Songun policy with his ‘own ideology of country first’ through a policy of nuclearisation coupled to economic reform. The entrenchment of the Juche philosophy merely reinforced with each and every Western sponsored act of isolation, has merely reinforced that thinking.

The conditioning of literally the entire populace to support and blindly follow the cult status of the leadership is fundamental to the continuation of the regime and the status quo. Again this is misinterpreted by the West, whereby they see freedom and liberties as the path to enlightenment and thus change. These people have a genuine reverence for the leadership. It is not only, or simply, engineered through brain washing, it is disturbingly real, and is used to feed their isolationist resolve as a nation – as far as they see it the entire world is against them!

The notion held by many that China is the key to a resolution and are simply not stepping up to the task of influencing their erstwhile neighbour is also a significant misconception. Yes, China does hold sway, but no longer the type or level of sway that is perceived by the West. The dynamics of the China and North Korean relationship have always been fragile and hostage to regional and global events. China’s strategic imperatives 20 years ago were different to what they are today. North Korea served a purpose 20 years ago, a means to an end, the problem now is that North Korea may actually be hindering China’s aspirations. In the corridors of power in Beijing, Kim’s name must be spoken through clenched teeth, and the young leader of the North certainly knows this. Kim’s actions are justifying the U.S. enhancing their military presence in the region, much to the angst of the Chinese. Though the Americans bear significant responsibility in the creation of the circumstances of this stand-off, it is not alone in this respect. The shifting sands of geopolitics has caught both powers unprepared for moves made by Pyongyang.

China could cut off the flow of oil, food and other necessities to the country, but that would merely create a humanitarian disaster on China’s doorstep and potentially a geopolitical weakening of a natural strategic and defence buffer for the Chinese. So why would they do that? The reason the Trump administration is laying the responsibility on China’s doorstep is because successive administrations from Clinton, to Bush to Obama all failed to address the growing problem. Trump has inherited a nightmare scenario, and he is trying to shunt it off to China to deflect responsibility (for the failings of his predecessors). If the worst-case scenario happens then others can share the blame for the ensuing nightmare that may engulf the region.

China is equally frustrated by North Korean actions, they actually weaken China (and Russia’s) strategic imperatives by justifying a greater U.S. presence and dominance on a security level through the deployments of intrusive missile defence and associated radar capabilities on their eastern flanks that contributes to the strategic encirclement of both countries. So yes, the Chinese though wishing to maintain the status quo, recognise that it is changing beyond their influence and it is clearly frustrating them.

The key to a lasting and genuine resolution of the current tensions and establishing meaningful dialogue has always been and remains the same, North Korea’s desire to replace the Armistice with a peace treaty. This is something they have been consistently asking for the past six decades and most recently in the past few years direct requests made by the North Koreans have been flatly rejected or ignored by the U.S. and the international community.

So, is it frankly that simple and literally always has been? One would like to say yes, but the reality is actually no, it is not that simple. It is essentially a starting point. Had that starting point been recognised some time ago then perhaps we would not be facing the situation we face now, but that opportunity has been long since lost. It is however a starting point for dialogue and engagement now that may well act as a catalyst to wind the tension back a bit and allow a breather before some fool makes the wrong decision.

In this scenario the political and diplomatic emphasis would shift away from America, and it would become an international community resolution if the U.S. (or another major U.N. power) were to officially propose to the U.N. to invoke a motion to replace the Armistice with a peace treaty. North Korea would be forced to the international negotiating table with the world community and not just the U.S. The U.S. would save significant face as the architect of such a gesture and it would remove the stalemate of this historic acrimonious bitterness between the U.S. and the DPRK. It would also achieve Trump’s objective to make this someone else’s problem (the international community) not solely an American problem. Perhaps this is the right strategy, true diplomacy, and maybe it should be the international community via the U.N. that actually steps up and finds the resolution.

The refusal of the U.S., and for that matter the U.N. in its perpetual state of lethargy, to address the North Korean request for a peace treaty must be questioned. The Armistice is not signed between the U.S. and North Korea. The Armistice was actually signed by the North Korean’s, also representing the Chinese, with the U.N. representing the U.S. and allies. Therefore, the emphasis actually sits with the U.N. to propose a resolution on the Armistice and end this stand-off. That is not happening, well certainly not from the American side. Perhaps other members of the U.N. Security Council could step up and make the proposal to the U.N. In light of the seriousness of the situation, the risks of a devastating conflict hanging in the balance, it would be telling as to who would veto such a proposal in this climate of fear. For whoever would veto it would be pursuing their own nefarious agenda.

Is this an over simplified suggestion to the longest running and now potentially most dangerous and increasingly volatile military stand-off in modern times? Perhaps it will read that way to those with a vested interest in maintaining the status quo and continuity of instability, to allow for the continuation of geopolitical posturing for self-interests. North Korea will never give up their newly acquired capabilities, this is more true in light of the Armistice that is essentially interpreted by them as a Western / U.S. statement of intent, i.e. the conflict is not over until the objectives of the war are achieved, the end of North Korea. This is what governs their thinking.

However, in the absence of leadership and courageous diplomacy we face a continuous zero sum game, MAD (Mutually Assured Destruction) versus SAD (Self Assured Destruction). MAD applies to the world, owing to the ramifications of a bilateral or multilateral led U.S. assault against a potentially nuclear armed North Korea that could ignite a much broader conflagration. They would have after all nothing left to lose at that point. SAD applies to North Korea, the strategic calculus here is that they need nuclear weapons to achieve sovereign security, yet by acquiring those weapons to verifiable status they could be ensuring their self-assured destruction under the pretext of MAD. Nobody wins in this stand off if it goes wrong, everyone wins if it is actually resolved.